The Shallow Man received an angry message from a reader complaining that my writing style was too sarcastic, “why can’t your blog be more like Stuff Dutch People Like?”  Now Colleen Geske, the woman behind that site does a great job, but The Shallow Man is simply not fluffy enough to write jolly observations about stroopwafels and herring.

In fact, the things Dutch people like, are pretty obvious, including complaining, shouting, and demonstrating their grasp of the English language. With this in mind, I’ll focus on stuff Dutch people hate.

There is more demand for fur coats in Jamaica than for stylists in the Netherlands. Dutch people have a strong dislike/distrust for people that take the time to look good.  In fact, this country is anti-fashion, a kind of denim lined black hole. The most important thing is to dress exactly like everyone else, don’t stand out, make sure that you lie and say  “je ziet er leuk uit”.

Being accused of being high all day

Yes, it’s legal to buy and smoke weed in the Netherlands under certain circumstances, but to all of you reading this from outside the Netherlands, the Dutch are actually pretty conservative. Most of the people smoking weed in the South of the country are Germans, fed up with their ordnung dominated lives they travel to the Netherlands to smoke some weed so they can tell their friends that they’ve done something exciting and illegal. Amsterdam is full of tourists, who used to the weak stuff that passes for weed in most European countries, lose their minds due to the strength and the added mixing with alcohol. It’s a pleasure for residents of the Museum quarter and the Jordaan to step out of their front doors and trip over tourists that are stoned out of their minds.

Never just knock on someone’s door just because you happen to be in the neighbourhood. You will lose friends for life. God invented the calendar for a reason. Your friends are eating zuurkool with a big fat disgusting sausage and gravy out of a packet. They are busy watching goede tijden slechte tijden, and then along you come, just like that. Where the hell do you think you are? Utopia? If they had known you were coming, they could have gone out and bought some of those cheese cubes, cocktail sausages, and some crisps. Now you’ve embarrassed them, they don’t even have time to arrange the chairs in a circle. Think next time before you turn up unannounced!

Being asked directions to the red light district

People, you’re in Amstelveen, there is no point asking some young posh Dutch lady with a Bugaboo pushchair (being pushed by the children’s nanny who is illegally in the country from Vietnam) the directions to the red light district. She stopped working there years ago and has settled down with a rich man, leave her alone, godverdomme!

Stopping for pedestrians at Zebra crossings

In the Netherlands black and white stripes on the road means go, go, go! Cyclists and car drivers have a motto when it comes to zebra crossings “ik heb haast”

A stupid invention by the British, totally unnecessary in the Netherlands. “Get outta my way, ik ben aan de beurt!”

Sharing their homes with international students 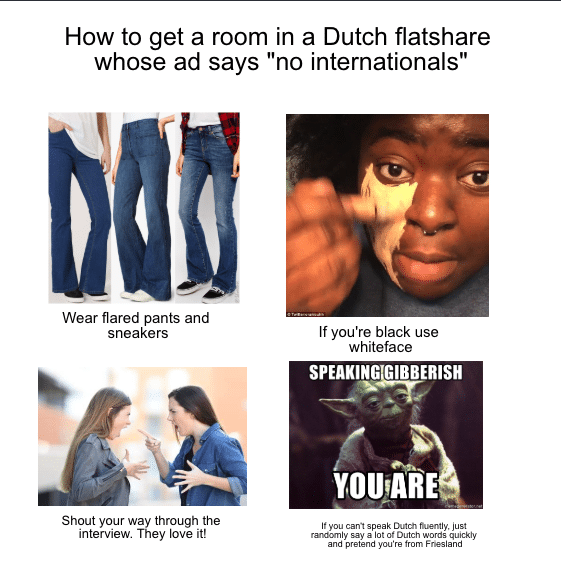 It’s only a matter of time before a Dutch author produces a book blaming the Kennedy assassinations on a couple of Moroccans on a scooter. Yes, Moroccans are over-represented in the criminal statistics, but surprisingly enough, there’s not a country in the world where the wealthiest members of society commit most of the crimes. In short, the poor or lower classes are often over-represented when it comes to crime. In other news the sun is yellow and the sky is blue.
Disclaimer: Yes I know that many Dutch people took part in the action aangifte doen tegen Wilders.

Picking up after their dogs

The Netherlands is a doggy paradise on earth. They can poop everywhere, the owners view this as not being their problem. Dogs can run around without leashes, even if they happen to be man-eating vicious breeds. Why does every pit bull owner always say “don’t worry he doesn’t bite” what happens if he does bite you? Would they then say “Oh, sorry that he ripped your hand off, he’s never done that before, do you have any infectious diseases that I need to know about?”.

Being questioned about Zwarte Piet

The Dutch are the most tolerant race that has ever lived ANYWHERE AT ANY TIME. If however, you question the appearance of  Zwarte Piet, there are three stages that you’ll experience.
1. Denial
“He’s not black he’s from Spain, actually he’s been down a chimney, it’s soot!”
2. Anger
“DON’T QUESTION OUR TRADITIE!!”
3. The deportation stage
“Als je zwarte piet ziet als racisme maar rot je toch lekker op naar een land waar ze geen sinterklaas vieren. Probleem opgelost! Maar blijf met je poten van ons mooie kinderfeest!”  From the ironically named Zwarte Piet is GEEN racisme facebook page. If anyone would like to see the ramblings of lots of incredibly tolerant Dutch people check out their page. The irony of claiming that ZP has nothing to do with race, followed by lots of clearly racist statements is lost on that sites angry participants.

More evidence of globalization, unnecessary interference in the favourite pastime of Dutch women.

I’m a little confused as I know a few older Dutch people, they are alive and well, yet according to Rick Santorum they are terrified that if they go to their local huisarts with a headache that they’ll be euthanized. Perhaps that’s why my former elderly neighbour used to have me pick up stuff from the supermarket for her, she was afraid that if she moved too slowly she’d be confused as dying and be put down like an old cat.

Lekker tolerant Dutch people throughout the Netherlands are stirring themselves into a frenzy whenever a local council discusses opening a center for refugees. This is often accompanied by violence. Some intellectual lovers of democracy have even taken to pinning pigs heads on the doors of proposed locations that will host refugees. Mooi! 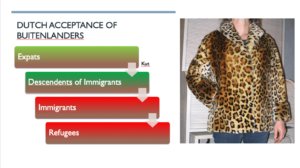 Are you in a relationship with a Dutch person? Are things going well? Are you planning to move in together? Make sure that every single piece of furniture, CD, sock, underwear, and DVD is documented in detail along with how much money each of you has. Yes, Europe’s greatest romantics often insist on a samenlevingscontract.

When Romania and Bulgaria won the right of freedom of movement within the EU, according to the hysteria whipped up certain elements of the press, Bucharest and Sofia were going be empty after January 1st, 2014 as thousands migrated to the Netherlands en masse,  in order to focus on petty crime and cloning of Dutch PIN cards. Even the ‘serious’ press participated, with bloated projections of the eastern hordes that would move to the Netherlands.

Tourists hire bikes, and then make the lives of the Dutch hell, by stopping at red lights and giving hand signals. The Dutch would love to carry out the motto of Spartacus, KILL THEM ALL!

If you’re in a shop or overpriced eatery, you should be grateful that they allowed you in to begin with. Learn to wait until the staff are ready to speak to you, don’t dare interrupt them from their trusted routine by asking stupid questions such as “how much does this item cost?” or even worse, “is it possible to see the wine list?” they’ll come to you when they are ready.

Mr Rutte, how about some bodyguards?

I’d like to thank everyone who provided suggestions for this post on my facebook page If my enemies don’t get me first, there’ll be a part two to this post where I’ll include further observations from my readers.

No tourists were hurt during the writing of this post. Until next time, empathy is a great thing to have, and if you can fake it you’ll be set for life.