Reasons To Cycle In The Snow Like the Dutch

Some Reason To Cycle in the snow just like the Dutch

The Dutch weather site weer.nl are predicting a 100% chance of snow tomorrow. In fact, up to 6 centimetres of snow is expected. It’s going to be colder than the heart of a tax inspector so wrap up warm. Now most sensible people will be doing their best to avoid leaving the house and if they do will wrap up warm and take advantage of public transport. Not in the Netherlands, 8 centimetres of snow won’t stop the Dutch from their love affair with bikes.  Some cynical people might suggest that the reason the Dutch cycle even in the snow is due to their love of saving every cent. But of course, that isn’t the case. It’s got nothing to do with that. So don’t worry about the chance of slipping and breaking your neck, get out there and cycle in the snow, just like the Dutch. Doe maar!

Whenever it snows there’s chaos on public transport. Ik ga lekker met de fiets!/I just take my bike! If you take a child with you on your bike when it snows, nothing will toughen up their immune system better than a bout of pneumonia. 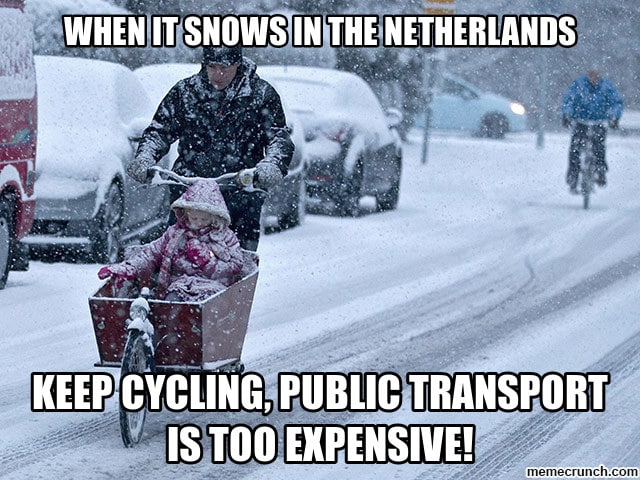 It’s nothing to do with the cost of using public transport. I’m asociaal and hate having to mix with the general public. Cycling allows me to be delightfully anti-social and passive aggressive without any consequences. Mooi!

Cycling in the snow is a wonderful way of meeting other like-minded idiots, sorry, people who share the same obsession with counting every cent and are not afraid to risk breaking a few bones just so as not to have to give money to public transport companies.

Cycling in the snow is a fabulous way to relax and to see how beautiful things look when covered in the snow.

There’s absolutely nothing wrong or ridiculous about cycling in the snow. Before you do, you might want to check with your health insurer whether or not hospital fees for broken bones will be deducted from your eigen risico. Whatever you decide, please, don’t wear these. 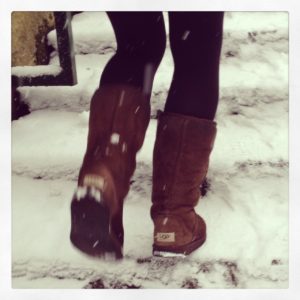 No orthopaedic surgeons were hurt during the writing of this post.

Infamous blogger, annoyance and self-confessed Shallow Man. Simon is a British expat who has lived in Amsterdam since 2004. As well as writing this blog, Simon also has a YouTube channel of the same name, writes and directs videos and hosts seminars about life in the Netherlands. He also works as a content marketing and SEO specialist.
@@amsshallowman

Dutch Word of the Week Plofkraken

Find a Cleaner That Suits Your Needs