If the Police were to actually enforce the law and fine every cyclist that failed to stop at a red traffic light or zebra crossing, Amsterdam would be the richest city in the world, why would we want that?

I took the mayors advice and did indeed rot op naar Limburg. I returned to Mount Vaals, the highest point in the Netherlands for some spiritual guidance. I wasn’t there long, when I came across a burning bush. Thinking it was left there by a group of Dutch people that had just had a barbeque, I was about to call the fire brigade when a voice shouted at me from within the flames.

“Shallow Man, it is I, Ingrid, who along with Henk are the God’s of Dutch normen en waarden.” Curious, I asked her,

-where’s Henk?
– Henk is busy at Albert Heijn they have Unox Knaks on offer for the halve prijs!

“Too many expats and tourists in Amsterdam continue to make the lives of the Dutch hell, by refusing to commit the almost deadly sins, that I’m about to provide to you. Tell your followers to.” .(at this point I interrupted her) “doe maar gewoon normaal?

Exactly Shallow Man, finally you’re learning. Tell them to commit the following almost deadly sins, so that they too will be holy and comply with the all important Dutch normen en waarden.”

So in spite of the many heretics that I know exist among you, the Shallow Man has returned from the mountain with more almost deadly sins of Amsterdam cyclists.

1. The Holy Trinity of Cyclists in Amsterdam

Anouk, Froukje and Noortje are on their way home from an evening of smoking and intimidating Dutch men.  The three of them are such good friends. Always texting each other. In and out of each others houses, and the beds of each others boyfriends. After an evening out, it’s absolutely essential that their stories are shared, immediately.  The louder the better.  “SO HE SAID TO ME, YOU’RE VERY SEXY, BUT  I HAVE A WIFE. I TOLD HIM, I’M NOT INTO THREESOMES, AT LEAST NOT ON THE FIRST DATE.”

Oh the hilarity, as all three girls almost wet themselves with laughter, while ignoring the cyclists that have been hit by cars, trams and buses, while attempting to overtake the three of them blocking the bloody bike path. As Froukje said to the girls “fietsen in Amsterdam wordt steeds gevaarlijker.” (Cycling in Amsterdam is getting more dangerous every day) 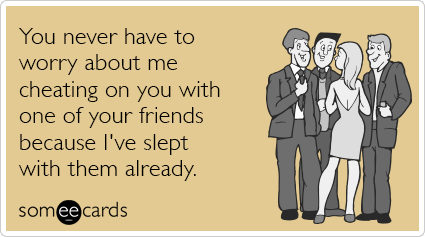 Anouk, chose her boyfriend for a single reason

If you’re out with two friends, always cycle along side by side with them, no matter how narrow the bike path might be. Het is toch gezellig!

Cyclists are divine creatures that radiate a holiness for all to see. Why on earth should they be expected to have working lights? Do you know how much hair gel, or how many pairs of ugly looking pantomime boots that wouldn’t look out of place in a performance of Robin Hood,  can be purchased with the money that needs to be spent on lights for bikes?

Remember that even if it is pitch black in the middle of the night, and a cyclist is dressed in dark clothing. If a car hits the cyclist because the driver was a damn agnostic, who failed see the holy light emanating from the drunken rider of the bike,  it’s the drivers fault!

Ten years from now you can say to your kids “Mummy lost both her legs because she was too stingy replace the light on her bicycle. But on the plus side, the driver of the car had to pay lots more for car insurance as a result, so of the two of us, he’s much worse off as a result.” 3. The chains that bind us

There are more bikes in Amsterdam than people. (How the hell do they know that? Has someone seriously driven around the city and counted all the bikes?) At Amsterdam Central Station there are simply not enough bike racks. Due to this, it’s only fair and completely understandable if you chain your bike to that of a complete stranger.

It’s especially handy if you’re about to bugger off on holiday to Curacao for three weeks, so that you can come back and complain to your friends, “It wasn’t really that good, it’s quite underdeveloped, and the men actually make the first move on women there, instead of waiting for us Dutch girls to pounce like a cat on a mouse.”

While you’re on your tropical island, being pursued by the local men (or ladies), the owner of the bike that you chained yours to, is stuck, unless she lowers herself to your level and becomes equally anti-social.

More traditional than exporting XTC across the world, or doing group dancing at a festival while high on the effects of the Netherlands number one export, as shown below.

Actually the video above shows why the Dutch don’t need actual black people to play Zwarte Piet. What natural non-drug induced rhythm these people have. I digress. A traditional sight, in Amsterdam South, Oud West, the Jordaan, and any other areas where yuppies are known to haunt the land, is the convertible mobile coffin on wheels, a.k.a. the bakfiets.

As the Dutch prophet, Albert van Schwein wrote in his famous book, ‘the smugness of the urban middle classes.’

It is good to save money, by transporting one’s spoilt offspring around in a ready made coffin with wheels. Take a corner too quickly, then all you have to do, is leave the bodies of the children in the bakfiets, remove the wheel, slap on a lid, and you’re done. Dat is toch praktisch and good for the environment”

The mobile coffin with wheels

It could be said that some Dutch people take things too literally. An example. The Dutch are known to be ‘koppig’ which means stubborn, or in English could also mean hard headed. Now, many Dutch people, especially in Amsterdam take this literally, and honestly believe that because their children are Dutch, that having them strapped to the back of a bike without a crash helmet is fine. If there’s an accident (most likely caused by another cyclist or a scooter) it will be ok, as the child is ‘koppig’ their little skulls will be fine!

Perhaps urban life is too boring for many locals, and they have the need to spice things up by strapping babies and toddlers onto the front and back of their bikes without crash helmets. The Shallow Man often watches in amazement as parents cycle along, yak, yak, yakking on their phones, while they have small children on their bikes , or strapped to themselves, with no crash helmet in sight. What could possibly go wrong?

No parents with thick skulls were hurt during the writing of this post.

Till next time, Hou je kop!

Airbnb in Amsterdam the pros and cons

I Am Not an Amsterdam Elitist

Tips for Expats looking for apartments in Amsterdam