Dutch Tolerance and the Jobs Market

The Jobs Market and Dutch Tolerance

Mark Rutte, the Dutch Prime Minister, knows how to fight and overcome the odds to be successful. Here is a man who despite a complete and utter lack of charisma, and a speaking style that is as exciting as a notary reading out the terms of a property contract, has fought his way to the top of Dutch politics.

This week he made a statement which says a hell of a lot about the Netherlands and Dutch tolerance.

I can say to the people of the Netherlands, ‘please don’t discriminate, judge people by their knowledge and character.’ But as it occurs, then Mohammed has a choice: Give up because of being offended or carry on. Newcomers have always had to adapt, and have always had to deal with prejudice and discrimination. You have to fight. 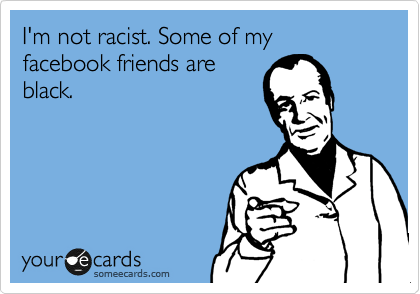 Not from within the EU? Good luck with fighting for a job in Holland!

A recent survey by the OECD and Eurostat published in the Volkskrant  shows that the Netherlands is one of the worst countries to be a non-EU citizen looking for a job. In fact, only Sweden has more unemployed non-EU citizens than the Netherlands. Only 49,5% of allochtonen, (the Dutch term for foreigners from a non-western background) are in full-time employment.

What’s very clear from the study is that the descendants of Moroccans, Turks, and people of the Dutch Antilles and Surinam are much more likely to be unemployed than Dutch natives. What are the reasons for such high unemployment amongst people from a non-EU background? The Shallow Man will seek to explain this.

Now, this post might annoy some, and if as a result, I’m captured by a group of angry Dutch HR women, who attempt to explain that the Dutch are the most tolerant people in the world and that most leading Dutch organizations employ plenty of allochtonen. I’ll say to the HR ladies “Yes I agree with you that there are plenty of allochtonen in most Dutch companies. They can be seen entering office buildings at 5 am to do the cleaning. I don’t really think that counts as successful diversity in the workplace.”

The head of HR at a major Dutch organisation

The fact that with the exception of Sweden, the Netherlands has one of highest rates of unemployment amongst allochtonen in Europe, has absolutely nothing to do with discrimination in the workplace. The Dutch are the most tolerant people in the world. Did you know that the Dutch were the first to legalize gay marriage?

I know for a fact that all Dutch firms are proud to be equal opportunity employers. Typically most Dutch corporate websites will usually have at least one token black person or someone with licht getinte huidskleur. (Lightly tinted skin color).

There was even an advert for a job agency in Amsterdam that I noticed one morning, which showed a bunch of white Dutch natives all standing around and sitting on a bus, which had the name of the agency on the side. The slogan was something like, ‘looking for a job? get on the bus.’ In the interest of diversity, they still managed to squeeze a black man into the ad. He was driving the bus. So that was one less unemployed allochtoon, success!

Question: If the Dutch are so tolerant, why are so many allochtonen out of work?

That’s a bloody good question. To which the only answers must be.

We’d happily employ allochtonen for jobs other than cleaning, and serving white bread with hagelslag (chocolate flakes) to grown men in brown shoes and trousers that are two inches too short. The problem is that our Dutch customers wouldn’t feel comfortable talking on the phone to a Fatima or Mohammed. They want to speak to Anouk or Jeroen, and discuss how FC Zwolle are getting on, or discuss how many decades Anouk has worn the same jeans before replacing them with a pair that look exactly the same. 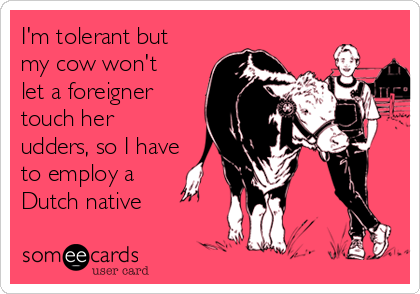 “They’re not as well qualified, which is why they can’t get the jobs”

Pardon my French, but that is absolute cows testicles. The OECD study shows quite clearly, that allochtonen with university degrees are still far more likely to be unemployed than their Dutch native counterparts. This, of course, can’t have anything to do with discrimination. The allochtonen, probably attend interviews with a bad attitude, and with a chip on their shoulders. Which is good experience for the only job they are likely to get in a Dutch corporation, frying chips.

Looking on the bright side, they can always get a job working for PostNL and deliver packages to the wrong addresses in revenge for not having had a fair shot at the job market. Perhaps this explains why so many taxi drivers in Dutch cities have such a bad attitude, they have degrees in accountancy, but instead of fixing the books of companies to pay as little tax as possible, they fix the meters to rip off passengers instead.

“They speak Dutch with an accent, our clients wouldn’t like that”

All Dutch people, speak Dutch with an accent. What this means, in fact, is that they speak Dutch with the wrong accent, or better said, without an aardappel in keel/potato in the throat, which is the posh method of speaking Dutch. Many HR people are graduates of the same hotel schools. They’ve been in sororities together, where membership often depends on having blonde hair and being whiter than the teeth of Tom Cruise.

They have built up a nice little network, of irritating, “I’m going to speak as if I’m from Het Gooi, when in fact I grew up in a slum in the Schliderswijk” (a rough neighbourhood in the Hague)

HR folks are not in the least bit intolerant, even if every time a CV arrives with a foreign sounding name, they file it in the wastebasket, as they just don’t believe that such a person will fit in.  Or better said, “we just don’t think that you are the rrrrrrrrrrright fit for our company.”

This has nothing to do with discrimination, have you ever been to the USA? Look at how they treat minorities there, then come to Holland, (on holiday, don’t move here we’re full) nowhere is more tolerant than the Netherlands.

A number of surveys have shown that even with the largest employment agencies in the Netherlands, that when people with identical CV’s apply for jobs, that those from non-EU backgrounds are not offered the same opportunities.

‘They’ being the pesky foreigners. It appears to be a self-fulfilling prophecy. Mohammed applies for lots of jobs but fails to gain employment. He has to live, so claims social security. If he manages to get a job interview, and explains to the clueless HR person, that he’s been unemployed for some time now. He’s not likely to get the job, as the employer will be thinking “typical lazy allochtoon, living off social security.”

So the Shallow Man’s advice to unemployed allochtonen is to prove that you’re not interested in living off the state, and want to work. The best way to do this is to simply allow yourself to starve to death. Dutch employers will be so impressed with your independent attitude and sense of determination, that they’ll offer you a job on your deathbed.

Other tips for allochtonen to get jobs

According to the Prime Minister, ‘newcomers’ have always had to deal with discrimination.   So Mohammed, who is most probably third generation Turkish or Moroccan, is still considered by the Prime Minister as being a ‘newcomer.’ So Mr. Rutte, how many generations will it take, before Mohammed will no longer be seen as a ‘gast’ or a ‘newcomer?’  Four? five? or seven generations? Will the grandchildren of Mohammed (assuming he doesn’t starve himself to death) say in an interview forty years from now, “well our family has only been in the Netherlands for seventy years, so it’s not a problem if you don’t employ me as I need to fight to be accepted for my knowledge and character as a newcomer.”

If you’re discriminated against when applying for jobs, it’s your own fault, as you haven’t fought enough. The OECD is a left wing organization, and the author of the research was probably sold some white heroin instead of coke while in Amsterdam and has now made up the study to make the country look bad. The Dutch are tolerant, so the study must be wrong.

I’m sure I’ve heard that one somewhere before.

Till next time, if you’re a non-EU foreigner, fight for your right, not to be discriminated against in the Dutch job market.

My one-way flight to London has already been booked.

No cows were hurt during the writing of this post.

“I almost didn’t employ him, I thought he was from Surinam!”

Being Offended is a Choice and can get you beaten unconcious

Dutch Tolerance and the Uitzwaai Dag for Sylvana Simons