The Oyster Club in Amsterdam

I had the misfortune of eating a meal at the Oyster Club. The only positive thing I can think of to say about the place is what nice interior design they have. That’s the positive thing. Now onto the food and the service. The Oyster club starter of three types of tartar, looks as if it was put together by a trainee who has just started working in the kitchen on the same day.

The presentation was terrible, the portions small and was severely lacking in flavour. Onto the main course. The Tuna was served with Spaghetti that should have been wearing a diving suit as it was so watery. The so called Surf n Turf was described in the menu as coming with een Halve Lobster. Well I’d really like to know where in the world the Oyster Club managed to find Lobsters that were so small. The so called half had less meat on it than the average supermodel. When I raised this concern with the waitress I was told “that’s how we serve it” The Oyster club is overpriced. There is an old English saying, “never mind the quality, feel the width” That appears to be the philosophy of the Oyster Club. Terrible service, uninterested amateur staff. Not to be recommended unless you are the kind of person that goes to places only because they happen to be “in”. Was happy to get out of that place and won’t be returning. Here is a photo of the half a Lobster 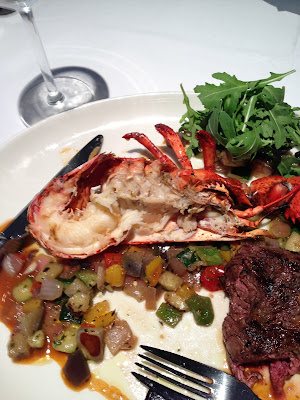 Schmoozing at the Conservatorium Hotel in Amsterdam

Mystique the best ribs in Amsterdam an emotional experience