What Expats Need to Know About Black Schools in the Netherlands

Black schools in the Netherlands

Recently the Shallow Man was walking through his neighborhood in Amsterdam when he came across a group of children wearing white t-shirts with the slogan ‘is dit wit genoeg voor u?”/is this white enough for you?’

I’ve no problem with creative marketing, but I felt that using children to promote washing powder was going a little too far. I shared my opinion with one of the adults present. You can imagine my surprise when they explained that in fact, the children were part of a protest action which was aimed at keeping their schools open by trying to attract more white pupils.

In lekker tolerant Amsterdam, the two schools in question are facing closure as 90% of their pupils are what the government defines as black. Which brings me to the subject of today’s post, black schools in the Netherlands.

So in the year 2015, in the capital city of the self-styled most tolerant country in the world, there are two schools in Amsterdam that are facing closure due to not being able to attract enough white pupils.

What on earth is a black school?

The Dutch government classifies any school whose ethnic mix has more than 60% of people from a non-western background as black. So if kids are from a Moroccan, Turkish, or Surinamese origin then they’re automatically considered to be as black as Dr Dre. (Great producer, unreliable headphones).

With this in mind, the next time I pay a visit to the excellent Turkish restaurant Killim in Amsterdam, I’ll say to the staff. “Yo brothers, what’s up my ni**ers” after all according to the Dutch education system kids from a Turkish background are black. 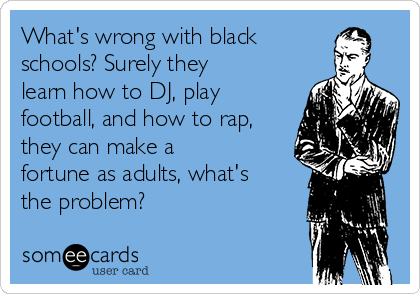 This has nothing to do with racism

The phenomena of black schools in the Netherlands is all about ensuring that people from non-western backgrounds are educated together. Which makes perfect sense. Kids from a Moroccan heritage naturally have lots in common with their peers from Suriname.

Have you been to the Pijp area of Amsterdam?

One of the schools trying to attract more white pupils is in the Pijp. The neighborhood is whiter than the cast of Gooische Vrouwen. (If there’s someone you really dislike, send them a DVD of this show). It’s absolutely understandable why the school in question can’t find enough white pupils. 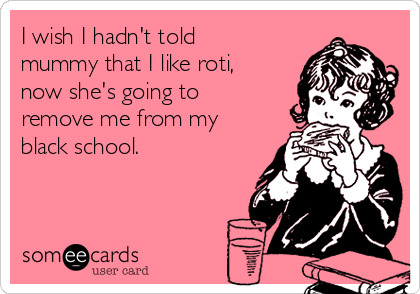 Yes the Netherlands has plenty of black schools, but it’s for the good of the allochtonen (non-western foreigners or better said foreigners we don’t value as equal). Some of the reasons that some native Dutch people choose not to send their kids to black schools are:

“I can’t risk my little Anouk speaking Dutch with a Turkish or Surinaams accent, what if she grows up to be a teenager and can’t roll her r’s properly? How will she ever be able to join a fraternity or work in HR?”

“Of course this problem only affects minorities, who’ll then find it more difficult to go to University or have careers in later life, but it’s their problem, not ours.”

“It’s a matter of choice, people are free to practice racial segregation without shame, after all the Netherlands is lekker tolerant hoor!” 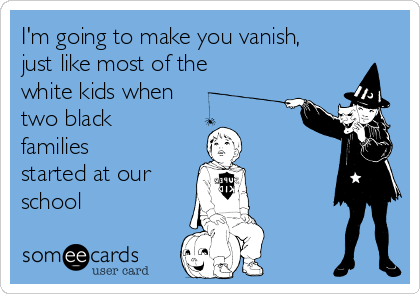 Social media is to blame

“Black people, even those who are not black, but we label them as such, used to be a lot happier before social media was around. Now they read on Facebook that they shouldn’t be happy with being segregated into schools based on race.  What’s the problem anyway? Surely they’ll be happier mixing with their own kind? You know this kind of thing  really should be ignored, it’s not a big deal. Have you seen what’s been going on in the USA recently? Terrible. 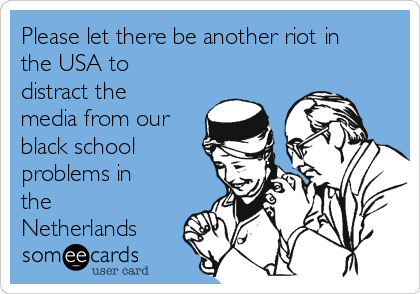 For starting this campaign and gaining international media attention.  I see a lot of the usual defensive comments on social media about this issue. It appears that the majority of commentators are not bothered by racial segregation in the Dutch education system, but in fact are more concerned about being accused of racism, which naturally doesn’t exist in the Netherlands.

The comment above is pretty typical of the debate at the moment. In English it translates as:

“Cultures separate themselves. You can choose where to go to school or where to send your children. Left wingers, please take a look at history and nature. This occurs every time and to fight against it brings only more suffering.”

I’ll leave you to draw your own conclusions.

The sun is shining. It’s a beautiful day. Yes there are black schools in the Netherlands  but it’s not a problem, racial segregation is absolutely fine in the year 2015.

No allochtonen children were hurt during the writing of this post

What expats need to know about black schools in the Netherlands?

Yes they exist, and it looks bad, but there are perfectly logical explanations to justify their existence. In Amsterdam and Rotterdam 50% of basis schools (primary schools) are classified as black.

I’ll leave the last words of this post to Humanity in Action.

“For several reasons, the separation of native Dutch from ethnic minorities in the education system is a starting point to explore issues of tolerance and multiculturalism in Dutch society.”