After a long and weary journey, across deserts, through biting cold blizzards where the snow was whiter than a garden party in Het Gooi. The exhausted traveller climbed to the top of a mountain, where legend had it lived the wisest man in the world. The exhausted traveller  spoke to the wise man. “I’ve travelled far and wide to find you, I seek the answer to one of the great questions of our time. Please tell me great guru, why do so many Dutch people work part time?” There ensued a long silence, after which the guru said to the traveller. “Your journey has been wasted, you really should ask the Amsterdam Shallow Man, for only he knows the seven reasons why so many Dutch people work part time.”

At a secret bar in Amsterdam, the traveller found me, and with tears in his eyes (a woman had just entered wearing floral patterned leggings and the flattest shoes I’d seen for some time) he asked me, “Shallow Man, I’ve been to the mountain and asked the question that’s been bugging me for sometime, why do so many Dutch people work part time?”

Which brings me to the subject of today’s post.

The Netherlands is a country that values freedom of speech. People here will tell you their opinions on just about any subject, whether you’ve asked for it or not. The Dutch love speaking their mind, and are never rude, just direct.

There are however a couple of subjects which fill the normally cool and aloof locals with latin rage and passion.

Both of these subjects cause the locals to become incredibly defensive, even louder than usual, and in some cases outright obnoxious and nationalistic. It’s usually a subject best avoided. However, the Shallow Man is duty bound to answer the questions of my readers.

Now this post might annoy some. However, I’m not too concerned about being captured by a group of angry part time working HR women. They tend to work such strange hours, that they’ll never actually be able to agree with each other when they should get together to teach the Shallow Man a lesson. You can imagine the discussions

“let’s get the Shallow Man on Tuesday afternoon.”

“No I have an aerobics class then, but am free on Wednesday mornings.”

“Wednesdays  morning don’t work for me, I go to yoga, then sit at Coffee and Coconuts in the Pijp drinking Chai latte.”

So in spite of the (low) risk of danger to my well dressed self, I’ll proceed with the seven reasons why the Dutch work part time.

1. Dutch children are the happiest in the world

One of the reasons given to justify the huge discrepancy between the percentage of Dutch women working part-time compared to women in the rest of Europe is that this has led to (as confirmed by Unicef and the UN) Dutch children being the happiest in the world. Forget the advances made by the feminist movement in the past thirty years or so. Just as a fishmonger knows their plaice (schol fish in Dutch) so do many Dutch women. Their place is at home with the kids. All the passive smoking, shouting, and regular visits to cafes, make the kids very happy indeed.

One only has to visit a bakery, a cafe, or a supermarket, and look at the smiles on the faces of children as they kick over shopping bags, fight, yell, and scream. While their proud mothers look on, and in a hoarse voice (from years of smoking) say, “Kindjes doe maar niet schatjes.”

Schatje, put the matches down please

Twenty-six percent of Dutch men work part time. Why? Because their partners told them to. No further explanation is required.

This is yet another case of where the Dutch have got it right, and the rest of the world has no clue whatsoever. You see, usually, one of the key indicators of emancipation and equality of women in society is financial independence.  But actually, measuring the equality of women in this way is of course nonsense. Women are emancipated in the Netherlands because just as with being tolerant, they keep saying that they are, therefore they must be.

Anouk: Jeroen, we’ve been living together for three months now.

Jeroen: Really? Are we living together now? You just stayed the night after our Tinder date, and never really left.

Anouk: So anyway, we’ve been together for some time, and there’s something we need to discuss

Jeroen: Oh my god, you’re not pregnant are you?

Anouk: No not yet, but it’s important for us modern emancipated women, to practice what it would be like being a mother. Therefore, I propose that I start working part time. Say three days a week.

Jeroen: Won’t you get bored? What will you do with your time?

Anouk: Oh don’t worry, Amsterdam is made for part-time women. I can join my friends and do Zumba classes, fitness boot camp, and spend lots of time sitting on the terraces of cafes discussing with my friends how stressful it is being a modern emancipated woman.

Jeroen: So if you’re going to be working part-time, does that mean you’ll cook dinner on your free days?

Anouk: Wie denk je wel niet dat je bent!/Who the hell do you think you are? There’s been an invention called the Internet, look it up, and then search for Thuisbezorgd. Hufter! 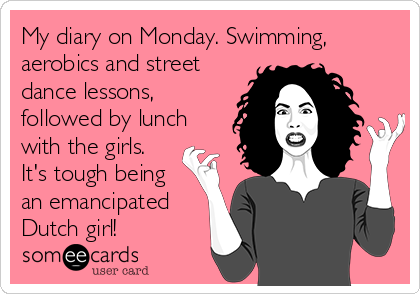 Forget XTC production, the taxi business, or the trafficking of women. The number one form of organized crime in the Netherlands is the nursery business. If the EU monopolies commission want to do something of value, they should investigate the cost of childcare in the Netherlands, it’s outrageous. Just as in the US the Mafia invest in the garbage collection business, in the Netherlands, mafia-style practices are used to keep the costs of childcare as high as the drinks bill following an evening at the Palladium bar in Amsterdam with some golddiggers running up a huge bar bill at the expense of a couple of makelaars and bankers. (As the bankers work for ABN AMRO, their taxpayer-funded bonuses are generous enough to cover such expenses.)

With the costs of childcare being so high, couples often decide that the highest earning partner should continue working, while the lowest earner (usually the female in emancipated Holland) will work part time. For appearances sake, the male partner might be bullied into having one day a week at home. (See number two).

The reason that service is often so appalling in the Netherlands is that most people obviously hate their jobs. So when living together, ‘the conversation’ is held.
“I can’t keep doing my job. Every day people keep coming to me, asking for help all the time, it’s so stressful.”

After a pause, their partner says. “Schatje, you’re a policewoman, people expect you to help.”

“I can’t take it anymore, I need to work part time.”

In 1971 only one in ten married women in the Netherlands worked outside the home. This changed in the 1980’s with more women participating in the workplace, however, due to many having children, they chose to work part time. Source: http://dare.uva.nl/document/2/143586

In the Netherlands, most things are possible. Cats can cohabit with mice, atheists can marry Christians. Women can cut off all their hair, wear sandals, and dress as if they are auditioning for the job of a scarecrow in a farmer’s field, and no one cares. (With the exception of the Shallow Man).  The working hours adjustment act  (The wet aanpassing arbeidsduur) sets out the conditions under which employees can amend their full-time contracts to work on a part-time basis.  In most cases, employees can choose to work part time, and whatever the reason many do.

Tatiana was happy in Holland, she could dress how she pleased and work part time

Sarcasm aside, compared to many countries, where employees are squeezed like the emancipated buttocks of ladies out for a night at the Kleine Cooldown Cafe, the Dutch have a fabulous work coffee machine, work-smoking break, work-life balance. Happy parents, make for happy children, which is probably the real reason that Dutch kids are the happiest in the world, and why so many Dutch people work part time. For expats the added advantage is with so many Dutch people choosing to work part time, this creates more career opportunities for expats. Win/Win.

No mafia godfathers were hurt during the writing of this post.

Essential Etiquette Tips For Foreigners When Staying with Dutch friends

Dutch Stereotypes of Other Nationalities the Top Seven