A common complaint from Expats upon arriving in the Netherlands is how rude they find the Dutch. Even some Dutch people returning to the Netherlands after being away for a few years share the same opinion. In a survey published in De Telegraaf in 2006, the Dutch voted themselves as the third rudest nation in the world behind the Russians and the French. The common response from some is that Dutch are not rude, they are just direct. Which is true? The Shallow Man will bravely go, where one, two or twenty men have gone before and will attempt to confirm if the Dutch are rude or direct.

Yes, unfortunately, I will have to generalize somewhat, and no doubt my comments will upset some. If as a result I’m captured by a group of angry Dutch people and made to watch the coronation of King Willem-Alexander, the not so bright, over and over again, I’ll stare fearlessly at my enemies and say, “Flikker lekker op jullie domme monarchists!” The things I do for my readers!

(Of a person or their behavior) going straight to the point; frank: he is very direct and honest

Are the Dutch Rude or Direct? You Decide

Depending on who you ask the Dutch are either often rude or direct. Far be it from the Shallow Man to take sides in this debate. Like a Judge that finds a member of his family about to be put on trial in his own court, the Shallow Man, due to personal reasons (close relations with the Dutch) will recuse himself from this debate and allow his readers to draw their own conclusions. However, I’ll provide some real-life examples of actual behaviors.

An English girl, who I’ll call Suzy, was having some issues with her weight. The fact that she kept bringing steak and kidney pies and other English delicacies to Amsterdam and consuming them in large quantities didn’t really help. While at lunch with some Dutch colleagues she happened to mention that she was on a diet to which one of the ladies present responded, “Not another diet? You keep doing these but you’re still very fat, perhaps you should eat less and do some exercise.”

A former Dutch manager of mine not long after I’d moved to Amsterdam once said to me, “From the telephone interview we had, I had no idea you were black. I don’t have a problem with blacks, it’s Moroccans I can’t stand“.

We have no word for that in our language

“I’ve lost count the number of times that people have bumped into me in the street and just walk on as if nothing happened. Words such as excuse me or sorry appear to be more difficult to get out of the Dutch than getting them to leave a decent sized tip in a restaurant. Is it a cultural misunderstanding? In the UK and in many other countries, it’s considered normal to apologize if you walk into someone, or kneecap them with your bag of shopping. Am I being too sensitive in expecting some acknowledgment when someone does something like this?”

Every man and woman for themselves

“Shallow Man, I am an American and when visiting Amsterdam recently, my sister got on a tram holding a young child. Not a single person got up and offered her a seat. I could not believe that the men in Amsterdam were so rude.”

The Shallow Man will add to this that whenever I give up my seat on the tram to an old person, they often look as if they are about to have a cardiac arrest, that’s how unusual it is for people to behave this way, in Amsterdam at least.

I believe that the way that Dutch react on Poles is an excellent example how rude can they be.

These are not just ordinary people that use rude language at the address of Polish. De Volkskrant called Polish in one of the articles “smerig volk” which I would translate to “shitty nation”.

Even the columnist of the NRC Next (the sister newspaper of NRC Handelsblad) Jan Blokker called Polish not so long ago on a national television “tuig” = “scumbags”.

Has he been direct? I don’t think so. To me, he has been just rude as one can be.

I could come with thousands of such examples. 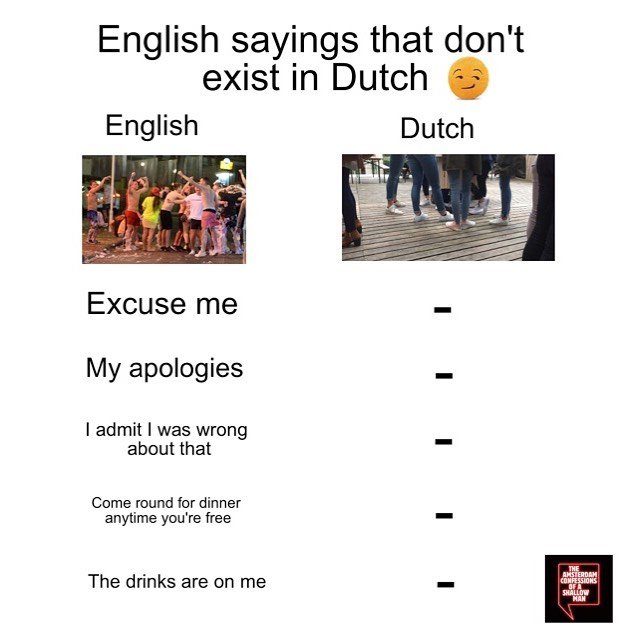 What do you think?

So there you have it, above are a few of the common occurrences that lead some to conclude that the Dutch are rude, or are these common misunderstanding about behaviour and are they actually just direct and telling it like it is?

My own views on this are that I’ve encountered a lot of rude behaviour here, and continue to do so on an almost daily basis. That aside, I also know plenty of very well mannered and polite Dutch people as well. So what do you think? Are the Dutch rude, direct, or just jolly nice chaps?

No serial dieters were hurt during the writing of this post.