The Shallow Man loves Amsterdam like Dutch men love hairgel. I have more love for this beautiful city than Dutch women have for cigarettes. I have more passion for Amsterdam than Dutch people who say “if you don’t like Zwarte Piet rot op naar je eigen land.”

My love for this city is legendary, I love it even more than my Playstation, which is a deep and serious love indeed.

I’ve roamed the streets, bars, and fine dining establishments of this city with pleasure. I’ve stopped and laughed at women in dangerously flat shoes and jeans with holes in the knees. At men with trousers raised well above the ankles in case of flash floods. (Why do they call them flash floods? Does the water arrive in a Ferrari?)

I’ve happily laid back and thought of London while various friendly antelope have abused my body like a mat in a fitness studio. My years in Amsterdam have been wonderful, however a change has come upon this city that needs to be addressed.

Which brings me to the subject of today’s post. Amsterdam tourism.

I’m not sure if that’s true. Here are some solutions to common problems in Amsterdam.

I could go on. So as you see I can offer solutions.

Amsterdam, now has 13 tourists per resident. This is obviously not enough. During my years here, i’ve witnessed the following transformation:

This bloody country is cold virtually all year round, even in June. Why does Amsterdam need so many ice cream places? I know that global warming is an issue, but we don’t have the tropical temperatures of Miami or Montego Bay. At least not yet. Not that it stops Dutch women throwing on a summer dress, birkenstocks (aaaaaaargh!!!!) and sunglasses at the first sign of sun. “14 degrees, lekker warm weer (nice warm weather), I’m going to sit on the terrace of a cafe in my summer dress and smoke and shout until I catch pneumonia. Gezellig!”

Waffles and Ice Cream stores go together like black schools in racially mixed neighborhoods in the Netherlands and weak excuses to justify their existence.

Forget exporting xtc, or people smuggling. Organized crime bosses know that easy money is to be made selling cheese, at outrageous prices to clueless tourists who are too lazy to leave Amsterdam and sample some of the many good value cheese places throughout the country. In fact, if you fancy a visit to Schoorl go and see my main man kaasboer Niek. The first time I visited his establishment he explained the various cheeses he had on offer and then said, “by the way I’m kaasboer Niek.” Somewhat taken aback, I said to him “Niek no need to apologise you’re not a kaas bore at all, I found your explanation very interesting.” 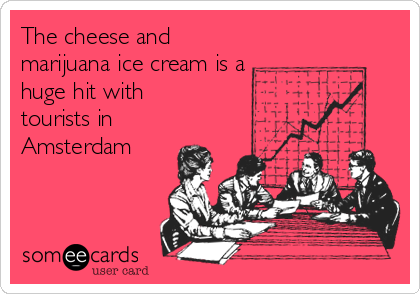 The plague of the rickshaws

As it says in the famous book, ‘doe maar normaal’ by Jan van Strakke Broek, “and the lord said unto the Shallow Man, tell the hipsters of Amsterdam to stop wasting money on superfoods, there’s no such bloody thing. It’s just food, which they pay far too much money for. Grass is for cows and sheep, not for shakes, gadverdamme! If they don’t stop wasting their money on superfoods, I’ll visit a plague unto them of people from the east, driving rickshaws through Amsterdam, blocking cycle paths and causing traffic jams wherever they go. Thus they will know that I am the Lord.”

Perfect for the narrow streets of Amsterdam

Tourists in every part of the city

It used to be that if you wanted to avoid tourists in Amsterdam, you’d simply stay well clear of the area between Museumplein and Central Station.  Avoiding tourists was as easy as a one night stand after getting a match on Tinder on a Friday night around one am.

Now, thanks to Airbnb, tourists are everywhere. It’s such a pleasant sight to have the smell of freshly smoked weed wafting in from the garden next door, where the owner has let out the apartment to tourists. It’s a joy to be woken up at 3am by  the drunken shouts of tourists coming home from a night out in the early hours of Monday morning.

Do I complain? Not at all. I simply say to the antelope who is keeping me warm on these cold June nights. “Tourism is so good for Amsterdam’s economy, I’m glad they’re having fun, leuk!!”

“People in Amsterdam are so tolerant, nobody minds us sitting in a residential street making noise at 3am they love tourists here”

The solution is simple. Amsterdam city council should simply get a consortium comprised of ice cream store owners, cheese shop merchants, Airbnb, Starbucks and Disney to buy the city outright. It’s happening by stealth anyway, so they should just make it official.

Disney with their expertise of running theme parks could provide valuable advice on the attractions needed to entertain tourists. Some suggested attractions and events could be as follows:

Explore the curious and wondrous world of Ecaterina, a Romanian expat who like the rest of the population of her country has left Romania and is now living in the Netherlands.  Follow her adventures as she’s patronized and spoken down to by the locals, even though she has a masters degree in business and is very successful. Watch as Dutch men send her angry messages on Tinder when she refuses to agree to have the first date in their bedrooms. Cringe as locals tell terrible jokes about hanging on to their handbags, and checking to see if their bikes are still where they left them. It’s a heartwarming story of Dutch tolerance and Romanian resilience. A must see.

What do you mean, I can pay for dinner with the copy of your pincard that I cloned earlier?

2. The magic of Maxima and Will

Tourists will be stunned and amazed at how two people who appear to be unemployed, live the magical life of a king and queen. Leuk!

Anouk is normally such a good girl. When horrible boys try and talk to her in bars, she shouts and shouts and shouts at them till they run away crying with bleeding ears. Some say she’s cold and frozen.  One day she discovers a magical smartphone app. With a single swipe and a wish, her prince charming appears and stays with her forever! Well for one night actually but the following weekend she does it all over again. One day her prince will come and then quickly disappear, like a rental makelaar/agent after a tenancy agreement has been signed.

Loved by people all over the world, Michel mouse is usually mild mannered and tolerant.  However, as soon as a crime story is reported on AT5.nl involving Moroccan, Turkish or black people he bravely sits behind his computer screen and makes racist comments on social media such as this gem below:

What a brave and fearless mouse he is.

Amsterdam is already on its way to becoming a playground for tourists. It’s about time the city council go the whole hog and sell it to Disney, Starbucks and other interested parties.

No mice were hurt during the writing of this post.

Living In Amsterdam Is Killing The Woman In Me