Essential tips for expats on breastfeeding in public

The sun is shining in the Netherlands, and everywhere I look I see breasts of all shapes and sizes prominently on display. They were locked away for the long cold winter. (Which lasted till June) But now, it’s as if there’s been a mass prison break of cleavage, with proud boobies saying “hello world, here I am, but you’d better not look at me.” To which the only response has to be, “If you don’t want the public to look at your goods, don’t put them on display.”

Public displays of breasts are fine, with only one exception. Expat mothers, would you like to breastfeed your babies in public? Doe het niet!/Don’t do it!

Naturally I jest. However, I was quite surprised recently to receive a message from a reader which said that in The Hague a mother with a 3 month old baby was told she was not allowed to breastfeed at the cafe of the Mauritshuis museum.  This caused quite an uproar on social media, which led to a group of protesting mothers holding a ‘feed-in’. The pressure eventually caused the museum to change their policies to be more breastfeeding friendly.

Apparently this is not exactly an isolated incident, which brings me to the subject of today’s post, essential tips for expats on breastfeeding in public.

Before we address breastfeeding, it’s clear that in society there’s such a things as good breasts and bad breasts.

A view of the female breast seen from a side; generally under loosely-fitting clothes. Very titillating (pun intended) and sexual without showing any overt nudity.
There is so much sideboob at Los Angeles awards shows! (From the urban dictionary)

Not to be confused with Dutch side boob

A view of the female bra, seen from a side; generally under loosely-fitting clothes. The bra should be as cheap and unpleasant to the eye as possible, preferably bought at the Hans Textiel closing down sale.

Perfect to put on display under a loose fitting top

Another form of ‘good’ breasts in the Netherlands is of course those seen on display in advertising campaigns. Sex sells, and there’s nothing better than slipping a pair of boobs into an advert.

When I choose a suit it’s essential that a half naked woman is involved, notice that the nipples are covered to protect the innocent

When the Shallow Man first moved to the Netherlands, it wasn’t possible to visit a park, beach or any open space for that matter on a sunny day without being greeted by lots of Dutch ladies sunbathing topless. In fact, this was so prevalent in Dutch society that the inburgering/civic exam for residency in the Netherlands even had a short film which featured the Dutch love of baring their boobies in the sun. Sadly, nowadays topless sunbathing is less common, but the Shallow Man says thanks for the mammaries.

Yes there’s such a thing as bad breasts, these are boobs that are exposed in order to feed a baby in a public place. Now you might say that I’m exaggerating, but here are some actual incidents that have taken place with breast feeding mothers in the Netherlands. These are excerpts from emails that have been shared with the Shallow Man.

“a worker came to me and asked me to go to the quiet area by the bathroom because it is not nice that people look at me. I told her that I don’t care if they are looking cause they are choosing to look and it doesn’t make me uncomfortable. Then she said: But it is not nice for our clients! “

“I had a most unpleasant experience today being asked to leave the children’s department because I breastfed my baby and was escorted out by a security guard… The “breastfeeding room” is one big joke, I would rather call it a storage area. It’s also very irresponsible to allow the blocking of first aid gear which is stored in the so called “breastfeeding room” If anyone would need it during those few minutes needed to remove me, my baby and a pram could cost someones health or life. HUGE disappointment…”.

Woman with a newborn baby.

Waitress rudely asks a mother to leave as she was making other people uncomfortable. Mother asks if anyone had complained, answer is “no but staff noticed they were not looking so happy”

Due to a social media storm which followed this incident, Starbucks international posted stating that all their shops in NL have been reminded about their policy to welcome breastfeeding mothers. 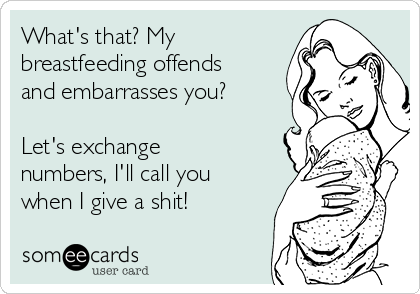 A mother was told that breastfeeding her baby was arousing men in the shop! Her husband demanded to see the written rules and was told by the member of staff (female) that it was her own “criteria”.

Reasons people are hostile to breastfeeding in public

So there you have it. Some examples, of what I’m being told is a relatively common occurrence. While researching this article I actually asked members of the Expats in the Hague Facebook group if they’d ever faced any hostility while breastfeeding in public. Much to my surprise, this turned into a huge debate about the rights and wrongs of breastfeeding in public. The discussion provided a good insight into the reasons people object to public breastfeeding.

1. Fear of the nipple

An exposed nipple is a wonderful thing if accidentally falling out of a dress or loose fitting top. (See side boob). However a nipple that’s being inserted into the mouth of a hungry baby is a terrifying and disturbing thing to witness.

Help, there’s an exposed nipple in the cafe!

Any man that genuinely gets aroused at the sight of a woman breastfeeding seriously needs to spend time with a good psychiatrist. Or perhaps a team of them, but apparently some people seriously believe that the sexualised nature of breasts means that any exposure to the sight of one (with a baby) has to be somehow sexual.

3. It’s upsetting to others

In the age of self. (Selfies, social media, general selfishness) there’s absolutely no reason to stare at a breast feeding mother. The Shallow Man was recently at a cafe where a woman began breastfeeding. I was sat nearby but simply found something else to look at. It’s that simple, just look away.

4. They’re exhibitionists and should cover up

I’ve sat in plenty of cafes throughout this flat and chilled land. I’ve witnessed a few mothers breastfeeding but can’t say that I’ve seen a single one whip out her boob and leave it to get some fresh air for a few minutes before attaching baby. There’s no exhibitionism involved. In most cases they use a piece of cloth to cover the baby and the breast so that no members of the public fall down dead with shock at the brief glimpse of an exposed breast.

What expats need to know about breastfeeding in public in the Netherlands?

What you really need to know is that the Netherlands like many other countries including the UK and the USA still has what I believe to be a minority of employees who through lack of training or outright ignorance are hostile to breastfeeding mothers. If you experience such hostility, remember that social media is your friend. Make sure that you go online and express your dissatisfaction.  The year is 2015, and people should learn that boobs are not only for fun or making Shallow Men smile on sunny days, but they have a practical use as well.

If your baby is hungry, and you’ve dared to leave the house, don’t give a bitterballen what anyone else thinks, go ahead and feed it.

I’d like to hear your views on breastfeeding in public join the discussion on my Facebook page or in the comments area below.

No hungry babies were hurt during the writing of this post 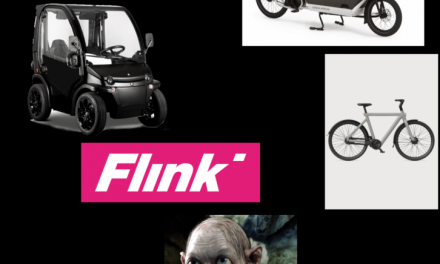 Lord of The Bike Lanes