1:  a patronising and irritating way of explaining some aspect of Dutch culture to foreigners

2: a tendency towards condescension

When enjoying the unique art of Dutch service, never, ever, complain to a Dutch person about how poor the service can often be in the Netherlands. This will lead to a statement along the lines of “Here in Holland, we treat everybody the same. People working in the hospitality industry are not your slaves. It’s not like in your backwards fake country where the serving staff are so badly paid that they have to pretend to give a shit because they’re desperate for tips. We pay our staff good wages so that they can afford to be rude to customers”. 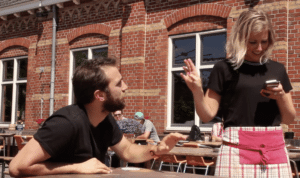 At some point during your stay in the Netherlands, the subject of a certain black gentleman, who isn’t really black because he’s been down a chimney will come up. If you provide anything other than outright praise for this ‘traditie’ you’ll be on the receiving end of the following Dutchism. “Here in Holland, we’re incredibly tolerant. We accept people from everywhere. Yes, we might not mix with them socially, or send our children to black schools, but that’s only because the Nieuwe Nederlanders don’t want that. They want to mix with their own kind.  Anyway, we treat minorities much better than in your fascist country”.

If you’re a sensitive soul, you might regard the unsolicited advice from a Dutch person about some aspect of your appearance, lifestyle or general existence as being rude. This will lead to the following statement. “Here in Holland, we’re not rude, we’re just direct. We don’t care if what we say upsets or offends you, it’s your choice to get upset. I worked in London for awhile and people were so polite IT MADE ME SICK!!! People never say what they think about anything.  Always, “sorry” or “excuse me” WTF?” I was so happy to return to Friesland, where you can tell people that they’re fat, ugly or stupid and they don’t get offended. It’s just telling it like it is”.

If as an innocent expat, you’re stupid enough to offer to pay the bill for a Dutch woman while on a date, prepare for one of the most serious Dutchisms of them all. “HERE IN HOLLAND, WE DUTCH WOMEN ARE EMANCIPATED. IF YOU THINK THAT PAYING FOR MY BILL WILL GET ME OUT OF MY RIPPED JEANS AND LEOPARD PRINT TOP THEN YOU BETTER THINK AGAIN MISTER!!!!. HOE DURF JE HET TE VRAGEN!!!!”

5. A sense of occasion

If by some miracle you’re invited to attend a New Year’s Eve party by some Dutch people, don’t whatever you do put on your sharpest suit or finest dress and heels. You’ll be confronted with “Here in Holland, we don’t feel the need to show off like people in your country. We’re quite happy to dress casually (at all times). I mean why are you dressed like that? You look like a pimp/prostitute. Doe maar effe normaal!”

To avoid being overdressed at a Dutch party, follow this advice. There are a lot of containers in the Netherlands where you can throw away old clothes. On a Saturday afternoon, hang around one of the containers and when someone arrives with a bag of clothes to throw away, offer them three euros for it, which they’ll gladly accept. Take the clothes home and dress in whatever you find in the bag. Make sure that you tell your hosts that you paid three euros for the entire outfit. They’ll love it!

Nice outfit, but please wash the clothes first next time”

No second-hand clothes dealers were hurt during the writing of this post.

Cheese and Whine Five Things The Dutch Blame Expats For

Be Careful Where You Go for a Massage in Amsterdam