Dutch Tolerance and Refugees in the Netherlands

Refugees in the Netherlands and Dutch Tolerance

Tolerantie. (Tolerance) What a lovely word. Like a drunken stranger one meets on King’s day it feels good on the tongue.  In the Netherlands, tolerance is automatically granted by virtue of having a Dutch passport. “I’m Dutch, and the Dutch are tolerant, therefore, I must be tolerant.” This unwavering belief in the tolerance granted by having the Dutch nationality, excuses all kinds of behavior.

The Netherlands, has been receiving a lot of criticism about its treatment of failed asylum seekers. Now some of my non-Dutch speaking expat readers, may be wondering what all the fuss is about in the Dutch media about uitgeprocedeerde asielzoekers/rejected asylum-seekers.

Which brings me to the subject of today’s post, Dutch tolerance and refugees in the Netherlands.

For such a tolerant country, the Netherlands does have a habit of producing extremely popular right-wing politicians. Rita Verdonk, former leader of  Trots op Nederland which like a blind date I once went on, promised so much, but failed to deliver. There was also Pim Fortuyn, and his ideological successor Geert Wilders. In this respect, the UK is a few years behind the Netherlands, as Nigel Farage of the UKIP, who shares similar sentiments about immigration as the PVV has only relatively recently crawled out of the gutter and entered the mainstream.

The policies of the PVV can be summarised as follows:

The popularity of the PVV has led to the mainstream parties of government, the VVD and PVDA, desperately shifting to the right.

The Netherlands takes on too many asylum-seekers

If you believe the rhetoric that is being put out by the government and the PVV, the Netherlands is taking on a disproportionate number of asylum seekers. Especially for such a small country.

The Netherlands is being flooded the stats are wrong! (source: BBC)

As the charts above show, the Germans and the French might not be too impressed to hear about the huge numbers of asylum seekers heading to the Netherlands. In fact, even Belgium processes more asylum requests. But hey, let’s not allow the truth to get in the way of a good political untruth.

Henk and Ingrid once saw an African family buying bitterballen in Brabant, therefore the country is being flooded with asylum-seekers. They’ll cast their votes for the party that promises to be the toughest with immigrants. The Government can’t stop all those Eastern Europeans coming in because of the EU, but at least with asylum seekers they can do something about it.

A sad reality of living in a first world country, is that the poor and the desperate will attempt to move here for a better life. We can debate the rights and wrongs of this, but just like Amsterdam cyclists being a menace on the roads, it’s just a fact of life that you have to deal with.

The VVD and how it determines Asylum-Seeker policies

In the Netherlands asylum-seekers are entitled to shelter from the moment they apply for asylum, until they are either granted a residence permit, or are rejected and then asked to leave. Now you might wonder why the Dutch government doesn’t simply deport failed asylum-seekers. Well, it’s expensive, and some asylum-seekers deliberately destroy their papers, as well as lying about their country of origin. Previously, they would have remained in an asylum center until their true identity was determined. However in a bid to appease rightwing voters, an immigration law was passed which restricts the maximum government support for failed asylum seekers to 28 days.

After this, the idea is that they should then voluntarily rot op naar hun eigen land. (Bugger off home, wherever that may be). Like Pontius Pilate, the government have washed their hands clean of all further responsibility.

This policy, while no doubt comforting Henk and Ingrid that the unwanted foreigners are being dealt with, has in reality created a nightmare for city councils in the Netherlands, particularly in Amsterdam. As a result of this policy, groups of failed asylum-seekers have been taking shelter in churches, office buildings, and even on patches of empty land. 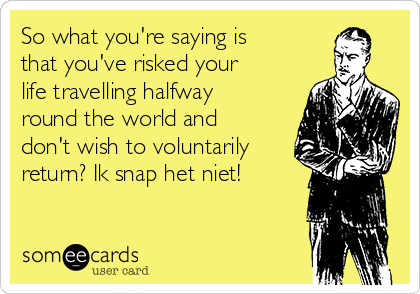 Obviously councils don’t want hordes of starving homeless refugees sleeping on the streets. It’s bad for tourism. So many have offered bed and breakfast facilities to rejected asylum-seekers. This wasn’t good enough for the government who then demanded that the local councils stop providing such services to rejected asylum-seekers. Let them starve! 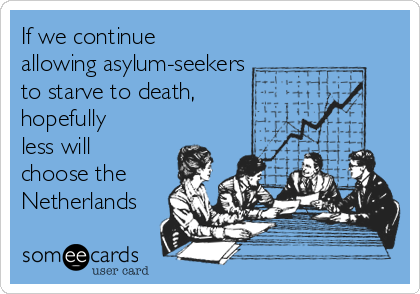 The council of Europe stepped in and ordered the Dutch government to provide decent humanitarian conditions to rejected asylum-seekers. Now of course, this is not what the government wanted to hear. This was too much even for the PVDA, (the Dutch labor party) who have worked with the alleged liberals (VVD) to come up with a solution. Finally, an half-arsed agreement has been reached. Only the five largest cities in the Netherlands will be allowed to offer accommodation to rejected asylum-seekers for a maximum of two weeks. They can remain longer, if they cooperate with the government on returning home. If they don’t, they are to be thrown out on the streets. In other news Turkey’s have started to vote for Christmas.

We can’t keep taking in refugees in the Netherlands we’re full!

Ultimately, according to the Dutch political parties on the right, the country is full, and shouldn’t have to take on any asylum-seekers at all. They even lobbied the EU with a plan to close all European borders to asylum-seekers, and have them processed in their countries of origin. (51% of Dutch people polled supported this idea)

Ladies and gentlemen, this is your captain speaking, I’m turning the plane around as the Netherlands is full

Proof that Holland is full

To be fair, there’s plenty of evidence to suggest that the country is full:

You know the problems in Holland might be first world ones, but they should be taken just as seriously as the issues faced by refugees in the Netherlands. If we carry on allowing them into Holland, the already unacceptably long wait for a Latte in hipster cafes will increase. Tolerance, obviously has its limits.

The country is full, every King’s Day

I’ll leave the last words on this subject to Philip Alston, UN Special Rapporteur on Extreme Poverty and Human Rights.

The Netherlands Is Number One For Hate Speech On Facebook