On an unusually sunny day in the workers paradise that is commonly known as the Netherlands, I’d just finished a run when I bumped into a Dutch friend of mine. I was wearing a sleeveless t-shirt. “It’s great that in the Netherlands we also have the right to bare arms, just like the US,” I said laughing at my own joke.

The Shallow Man’s spontaneous witticism left my Dutch friend as cold as a Dutch woman asked to give up smoking. He didn’t get the joke, which brings me to the subject of today’s post, five differences between British and Dutch men.

The British and the Dutch have about as much in common as Kim Kardashian and talent.  In fact the only common ground we share is language which I’ll come to later. To paraphrase the title of a best selling book, Dutch men are from Mars, and British men are from Venus (the planet not the sexshop).

When it comes to feminism, Dutch men know their place. Which is firmly pressed into the ground, under the dangerously flat shoes of Dutch women. The Dutch woman shouts “jump” and the Dutchman says “how high dear?” I love watching them out shopping. The stressed Dutchman running over to his bossy partner who staring at him with withering contempt shouts “I SAID PETERSELIE (Parsley) THAT’S MINT, IDIOOT!!!”

Well this is a difficult one. I think it’s fair to say that there are two attitudes towards feminism in the UK. There’s the right on, PC, sociology graduate types, who learned in university that if they made the right noises about women’s rights that they’d end up in bed with feminists. These right on types, typically read the Guardian or the Independent and are gifted in the art of saying exactly what British feminists want to hear.

There’s another type of British man that says “feminism is a wonderful thing, but not in my house.” The guys that say that kind of thing are usually under the thumb of dominant women at home, as much as they like to pretend otherwise. So in that sense, British and Dutch men do have something in common.

Happy Dutchman at home helping around the house

The Dutch education system turns out men who can speak at least three languages well enough to be patronizing and stubborn in all of them. In fact Dutch men (well the Dutch in general actually) are the only people on the planet who feel so confident about their language skills that they’ll even take the time to correct the English of native speakers. My advice when this occurs is to smile, nod your head and don’t say “hey eikel, hou je kop, jij arrogante hufter.”

We Brits regard “speaking foreign” as an exotic and fictional activity, usually reserved for heroes such as James Bond or Jason Bourne. We’re appalling at learning other languages. We’re more focussed on mastering the subtleties of the UK’s various dialects. To a Londoner, a geordie (a native of Newcastle that’s never left) sounds almost as foreign as someone speaking Dutch.

We Brits believe that if you shout English loudly enough at foreigners that eventually they’ll understand you.
“DO YOU KNOW THE WAY TO THE RED LIGHT DISTRICT? YOU KNOW, JIGGY JIGGY”

“I SAID THAT YOU’RE A VERY TALL WOMAN, I’D LOVE TO HAVE A LONG LIE IN WITH YOU”

If you were to lock a monkey in a room with a typewriter for thirty years, eventually it would come up with better lines than those used by Dutch men when attempting to flirt with the opposite sex.

When it comes to flirting, Dutch men can be brutal. They believe that the best way to get a lady out of her comfortable clothes is to hurl insults like throwing darts at a board until one of them hits the bullseye.  This often leaves expat women gasping in shock.

Some examples of Dutch men flirting are below:

“Were you planning to go to a wedding after our date? I assume that’s the reason you’re wearing all that makeup”

“Was it a difficult journey to the bar? You look much older than the photo on your tinder profile”

“It’s nice to meet a Bulgarian that’s not a pickpocket. My wallet is still here, and I know how much money I have so none of your light fingered tricks ok? Ha, ha, ha.”

Every British man grows up wanting to be James Bond. Those who grew up in the era of Sean Connery, Roger Moore or Pierce Brosnan, observed the techniques used by Mr Bond and did their best to emulate them. In short, what the majority of British men were aware of was that it took charm, humor, (and an Aston Martin didn’t hurt) to be able to remove the petals from an English rose. In the UK, men used to know how to flirt, it was just part and parcel of something you learned as a teenager.

B.T.S.G (Before the Spice Girls) one had to chase women, wine and dine them, and pretend to be interested in their endless feuds with other women before you had any hope of success. In the post-Spice Girl age, the UK is almost as bad, or actually even worst than the Netherlands when it comes to aggressive women calling the shots.

Drunken gangs of British women hunt down men like hunters chasing a fox. There’s no need to know how to flirt anymore, just insert some nose plugs to hide the overbearing smell of alcohol, wear at least two condoms, and allow the inebriated British girls to ravish you. 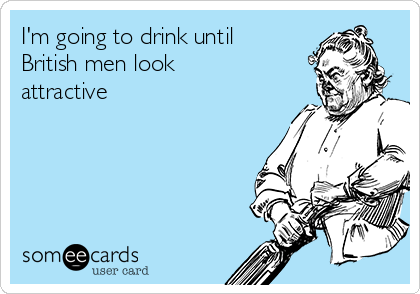 If British women wouldn’t get drunk in pubs, the population would rapidly decrease

Huge towering tall men holding dainty little glasses of beer. You’ll rarely see a drunken Dutchman (with the exception of King’s Day or after euthanizing a relative) as it would take them days to get drunk on the tiny little biertjes they drink.

Dutch men watch how much they drink almost as carefully as they avoid having to pay for anyone elses drinks.

On Friday nights the average British high street at closing time resembles a war zone. Drunken broken bodies lying around. People being sick, fights with the police and each other, and that’s just the women! The great thing in the UK is that you can never feel like an alcoholic, as the average consumption of booze is so high. If like the Shallow Man you only drink a few glasses of wine during an evening out, that’s practically the behavior of a teetotaler. 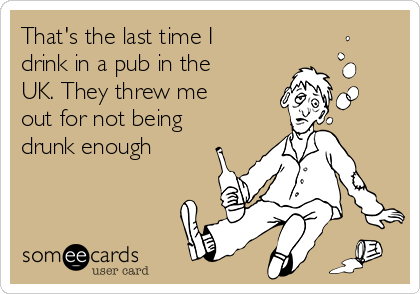 There’s one aspect in a relationship that Dutch men won’t tolerate being given orders, and that’s marriage. The typical Dutchman will move in with his Anouk or Marloes within a short space of time. He’ll not object when she immediately sticks her fingers up at the Dutch taxpayer and decides to start working two days a week so that she has more time to smoke and not get her hair styled. All of this will be fine by him, but at the mention of marriage, Koen and Jeroen will suddenly find their testicles and shout “Rot op!”

There’s more chance of a Dutchman admitting that Zwarte Piet might actually be black, than getting them to agree to marriage.

In backwards countries such as the UK or the USA, men have been known to feel obliged to marry their partners when they get pregnant. In the Netherlands this is no problem at all. Dutch men will have two or even three children with the same partner without feeling any obligation to get married.

Another problem caused by the excessive consumption of alcohol is that British men will lurch drunkenly into marriage with some nightmare woman, just because she’s been hanging around for awhile.

“We have so much in common.”

Every young British couple believes that they are the next David Beckham and posh spice, or Kim and Kanye. They all want the big celebrity wedding, which they’ll run up huge debts to pay for. Everyone is invited, even people they hardly know. All the drinks and food are paid for. (Not like Dutch weddings where they have pin card machines on each table). Two or three years later, the happy couple sobers up, and realises that they have nothing in common, in fact, they hate each other, time for a divorce. 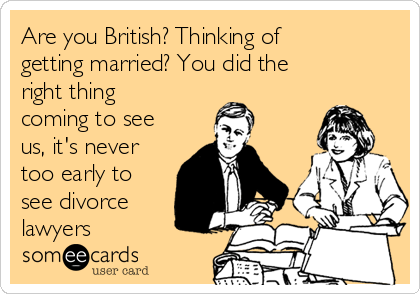 So ladies, if you’re looking for a man that will insult you, not care how badly you dress, and will do most of the housework, but is highly unlikely to marry you, go Dutch. If you want a man that will make you laugh, will be drunk most days of the week, and will actually marry you, (but divorce you soon after) go British.

No members of the Spice Girls were hurt during the writing of this post.

Until next time, here’s a piece of classic British comedy.

Tinder Dating in the Netherlands a SWOT Analysis